My Car Free Life (so far)

The last 3 months I have been living a car free life.  I first explored the cost of owning a car when my parents needed their car back.

Since giving my parent’s back their car in early January, I’ve been taking public transportation or walking for all my usual tasks, which include:

I also car pooled (read: got rides) from friends to the nearest subway stops or to my destination (if it was along their way), whenever it was convenient for them.

Thoughts on Being Car Free

Perhaps I could have picked a better season to dive into this “car free” business, but life happens :).

Initially, I dreaded the thought of walking to and from the bus, and sit through traffic as the bus stopped at every. single. stop.  Or I would dread when I missed a bus/train and trigger the domino effect or messing up the meticulous planned travel itinerary.  But it wasn’t that bad!

Sure, there was that 3.5 hour commute from Hamilton to Toronto on a Sunday after a no-show city bus, which lead to me missing the GO train (domino effect in full effect here).

On average, I took about 30 minutes to get to work, including walking to and from the bus stop (about 700m).  The bus comes pretty often during rush hour, most of the time, and the bus ride itself is only about 20 minutes.

On the other hand, if I were to drive, I would take about 15 minutes.  In the winter, it would take  me an extra 5 minutes to clean off all the snow from the car, so this is definitely a win.

I’ve learned to pack a small make-up bag, and usually have that in my purse, just in case.

Sometimes, I find it overwhelming, having to think 2 – 4 days in advance and plan what  what I need to bring with me.  But, things have worked out pretty well, so far.

It’s Less Flexible Getting Around

Instead of just picking something up on my way home, I either pick up my groceries on weekends or at the corner Italian grocery store.  Since I don’t have a Metro pass (I use tokens), it would cost me two fares to make a stop.

Living a car-free life is certainly do-able, especially in the city – and even where I live – at the outskirts.  Especially in the summers, walking and busing can be supplemented with biking for more exercise.   Living car-free requires planning, exercise and being patient.

Having said all that, I do miss having a car.  But even though I miss it, I have also accepted it and learned to deal with it.

If there was an opportunity where I can have a free car…  well, that’s a post for another day. 😉

What are your thoughts on being car-free?  What did you miss most about not having a car? 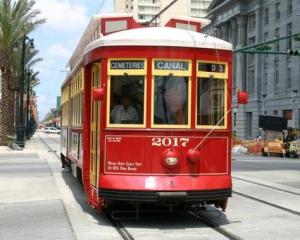 One of the most interesting courses I took in my undergraduate career was Urban Transportation Systems.  This course studied how public transportation evolved in a city, and different components and tools in each type of transportation system.  Even though this course was mainly a technical elective, I found the psychology behind the course equally as compelling, if not more so.

As you may realized from my previous post on the cost of car ownership, I am biased towards using public transportation in urban areas.  The following are some interesting points that I encounter in my everyday life.

One of our first exercises was to take the local pubic transportation in our city from point A to point B.  There was no time interval; however, we needed to have at least one connection in our trip.  Before we took the trip, we were to estimate how long out trip length would be, and compare it to our actual travel time.

People who did not regularly take public transportation over-estimated their travel time by 2 or 3 times as long!  You can see how this becomes a bad cycle.  People who don’t regularly take transit think it will take too long to get to their destination, so they don’t use it.

For my example, I took the bus from my university dorm room to get to uptown for groceries.  I checked the bus times, and waited for my first bus.  When I got to my transfer point, there second bus was waiting there, and I had no wait time for the second bus.  I was at the grocery store in 15 minutes and I had guessed it would take me 35 – 45 minutes.

One of the things I discovered about taking transit in my University City was that buses would often wait for each other at main intersections.  Since routes would only run every 30 – 45 minutes, off peak, simply working out the schedules of major routes so that they only need to wait a little bit for each other goes a long way in optimizing the transit system and making it more enjoyable for those of us who used it. 🙂

Some cities even have a system where you can call or text a certain stop number to find when the next bus will arrive.  Some cities also have estimated wait times posted via an information board at certain stops.  I think every major city has a transportation website where you can find bus/train schedules.  Some websites even allows you to type in your location and destination, and proposes various routes to you.

Schedules are very useful if you’re not in the downtown core.  It takes a bit of planning, but it’s worth it.  Always buffer in some extra time just in case your bus/train gets there a little early.

I have been debating for the last little while the cost of owning a car, and whether I want to be a car owner or not.  I’ve thought about the reasons why I want the car, and also the costs of owning and driving a car.

Reason why I want a car:

It would be convenient to get to places.  I can use it to get to work, I play volleyball once a week, and I also use it drive home to visit my folks.  I would also be able to carry groceries home easier and not be cold waiting for the bus, or having to follow bus schedules (which don’t run very often on weekends).  I also use my car for work, and drive to meet clients.

Reasons why I don’t need a car:

I live within 5 minutes of walking to two different bus routes – one of them takes me very close to work.  It’s about a 25 -30 minute bus ride and about 15 minutes of walking, so it’s certainly do-able.  Volleyball games are also usually close to the subway.  It would take planning but is not impossible.  There is public transportation that I can take to visit my parents.  It takes almost 2 hours one way, but I don’t really mind being on the bus that much.  I can listen to music and sleep.  For work, I can try to use car sharing programs such as ZipCar or AutoShare since they do have locations close to my office.  Will have to get my manager’s approval for this one.

I plan to buy my car second hand.  I’m not completely sure which car I want.  I debating between a used Corolla (early to mid 2000’s) or a used minivan (also early to mid 2000’s).   I like the Corolla because I’m used to driving one and it’s super awesome on mileage and easy to drive.  I like the minivan because I can find it for a better price and can likely get cheaper insurance for it.  At the end of the day, I really don’t care what type of car I drive as long as it’s safe, reliable and easy to drive – I really don’t care about the cool factor in the car I drive.  The cost to purchase the vehicle will range between $5,000 to $10,000.  I will buy it with cash.

I am a young driver (I’m 26) and it will be my first time being the primary driver.  I also have not been insured for that long (under 2 years) and I been quoted for $3,800 (annually) for the Corolla and $3,200 for the Minivan.  Outrageous, I know.  That’s what you get for driving in Ontario. That was the first quote I received and I am sure that I can get a better price, but the sticker shock opened up my eyes to the REAL cost of driving.  Let’s say I can find a price for $2,500 to $3,000 – it’s still a lot of money.

Since the main cost is the cost of the car itself, I also did the math assuming that I would be able to use the car for at least 5 years.  From this total cost, I calculated for the average annual cost in today’s dollars (note: inflation was not taken into consideration for this example).

If I didn’t have a car, I would use public transportation to get around the City.  I live on the outskirts of the City, though I do have access to public transportation – just not as frequent as the Downtown core.  I would also buy a monthly pass so that I won’t have to worry about constantly buying tickets – it works out to be almost the same, anyway. 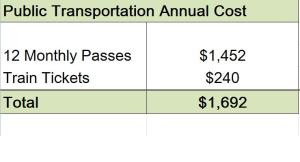 With those calculations, I have an average annual savings of $4,308 or $21,540 over the next 5 years!  That’s a lot of money that can be put in my Retirement Savings, my Emergency Fund, a Trip or put into some Dividend Paying Stocks! I like looking at numbers and this number is a huge incentive for me to NOT buy a car.

I also read a really neat post from Hi That’s My Bike (HTMB) about how they were literally paying themselves by not owning a car.  Basically, HTMB takes the money that they’ve saved and divide that by the time they spend on the bus.  I think it’s a very innovative way of thinking, and will apply that here.

I roughly spend 30minutes on the bus each way.  Each month I would spend approximately 20 hours on the bus, and I would save $218 by taking the bus.  (I am not counting the time that I will be making long commutes to see my parents, this is just day-to-day getting to work time.)  That works out to about $10.90/hour.  The more I take the bus, obviously the smaller the hourly rate, but it’s a good ball park number.   Unfortunately (or fortunately), it’s nowhere near as high as HTMB’s $26/hour, but it’s something!  And that money saved could easily cover my groceries bills for at least a month, maybe even two :).

How much are your car costs?  What are you paying yourself an hour if you don’t own a car?  Is it feasible for you not to own a car?